A guide to the Lake District

The Lake District in Cumbria is not only the biggest of the English National Parks but arguably the most interesting.  Designated as an English National Park in the 1950’s its 800 square miles of the rugged countryside has enjoyed the protection its status offers.  The Lake District enjoys over 14 million visitors every year to enjoy the beautiful landscape and its 3 mountains.

The area has provoked interest from a number of famous writers for hundreds of years.
Defoe in the 1700’s described the Lake District as “the wildest, most barren and frightful country in England”
Wordsworth (who was born in Cockermouth) published a guide book to the Lakes in 1835 and many still argue it’s one of the best guide books of all times to the area.  His guide was called “Guide through the District of the Lakes” which as I am sure you will agree is a very charming title for such a beautiful area.
The history of the area goes back much further as human settlement in the Lake District dates over five thousand years.  The reason was due to the mountains becoming a rich source of stones for weapons and tools. Occupation is evidenced by stone circles in areas such as Castlerigg & Long Meg.

The area offers such a wide range of beautiful scenery and wildlife it’s hard to cover.  Within the 800 square miles you can find marshes, rivers, waterfalls, ancient woodlands, forests, the highest mountain in England as well as … the lakes.
As you would expect from such a diverse area the Lake District is a haven for many types of wild birds and wildlife. 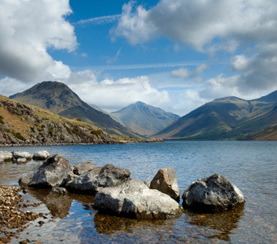 The three highest mountains in England are located in the Lake District - Cumbria (Scafell, Scafell Pike and Helvellyn).  The mountains attracts many visitors to the area.  Most of the mountains are accessible to walkers and as there are plenty of hills and mountains to choose from anybody who is reasonably fit can enjoy their splendour.  As with everything outdoor, you should take sensible precautions when venturing out.

Without doubt it’s the lakes and waters in the Lake District that most people visit the area for.  Again, as there are many waters to visit you will find a wide variety of countryside around the different lakes.  As such each of the lakes attracts a range of birds and wildlife adding to the areas beauty.

There are plenty of way marked country paths that are perfect to get out doors and enjoy the natural beauty of the area.  With such diverse countryside you will find walks and paths that are hilly in the mountain areas and hills as well as flatter, gentle walks around the lakes.

There is plenty to do on the lakes.  Many people travel to the area specifically to enjoy the water-sports on offer.  Places like Windermere are well known as great places to go for water sports.

There are a large number of thriving towns around the lakes. You will find a range of shops, restaurants, hotels, cottages and B&Bs available to book if you’d like to visit the area.

Castles in the Lake District and Cumbria

Getting to the Lake District

The M6 provides good road access to the area with access via a number of junctions at Carnforth (south) and Carlisle (north).  There are good coach services to the area as well as train routes from the North and South.

In summary, it’s fair to say that although the Lake District has a rich man made history with its ancient towns and castles etc. The area’s true magnificence is what nature has provided the area.