Scotland is the northernmost country that makes up the United Kingdom or Great Britain.   The other three are England, Wales and Northern Ireland.  Scotland is a mountainous country and to the south of Scotland (Borders) is England.  Scotland has the North Sea to the East, the Atlantic Ocean to the North and the Irish Sea to the South West. 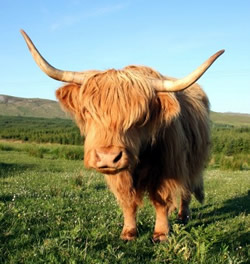 Scotland is well known for its mountainous, lochs and beautiful scenery.

there are over 600 square miles of lochs in Scotland.  The most famous is Loch Ness where mythical dinosaur like monster is said to lurk in the waters.

The highest point in Scotland is at the top of the mountain, Ben Nevis at 1.3km above sea level.

Edinburgh is the capital of Scotland and second largest city.  Famous for its New Year parties and Edinburgh Castle it is a beautiful and historic city well worth a visit or trying to get a cottage in or nearby.  Culture lovers from around the world come to Edinburgh for its famous arts festival. The largest city in Scotland is Glasgow.

The native language of Scotland is Gaelic but it is very rarely spoken in Scotland or Alba which is the Gaelic word.

Scotland is made up of around 800 islands.  However, only 130ish are inhabited in addition to the mainland.  We have details of cottage rentals in many of the larger inhabited Islands including Arran, Bute, Islay, Lewis, Mull, Raasay, Seil, Orkney, Hebrides and Skye.  Booking a cottage on a Scottish Island will allow you to enjoy beautiful countryside and seascapes and the tranquillity of a remote cottage.